This weekend, many McCutcheon Mavs suited up in the Cardinal & Gold to further their quest for a State Championship. As their post-season dreams lived on well into the beautiful fall evening with each victory bringing them closer to the dream of a State Championship.  Unified Flag Football, Boys’ Soccer, Volleyball, and Cross Country were all facing win or go home competition.  In true Mav fashion, each student-athlete gave their all for the team.  And in the end, they all came away with a greater understanding that no matter the outcome, it was still A Great Day to be a Mav!

Your Maverick flag footballers took to Grand Park’s indoor stadium to face the talented FW Carroll Chargers for the IHSAA Champions Together State Championship.  The Mav’s were inspired and motivated to give their all after the Champion’s Walk send-off they received at school on Friday. 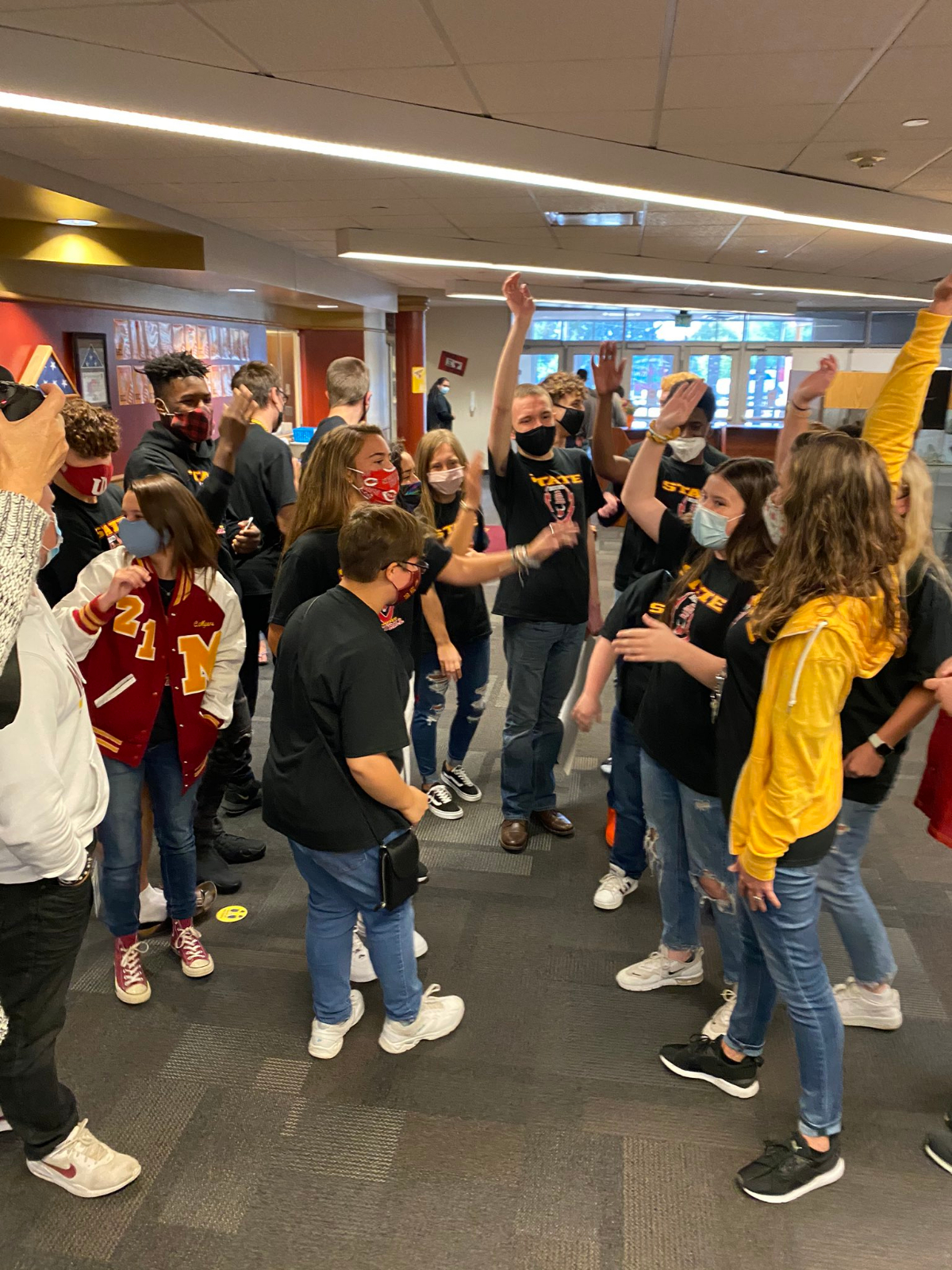 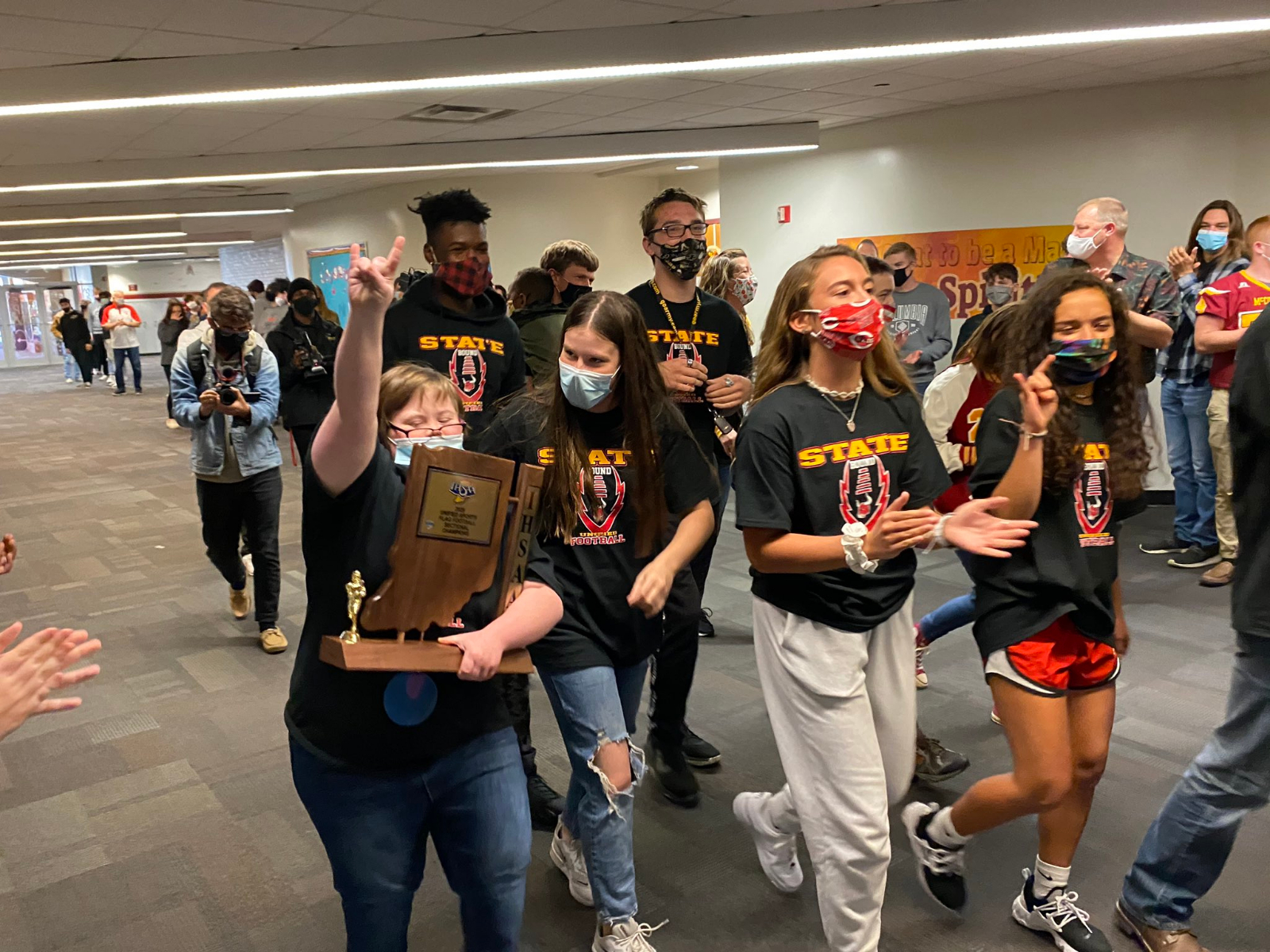 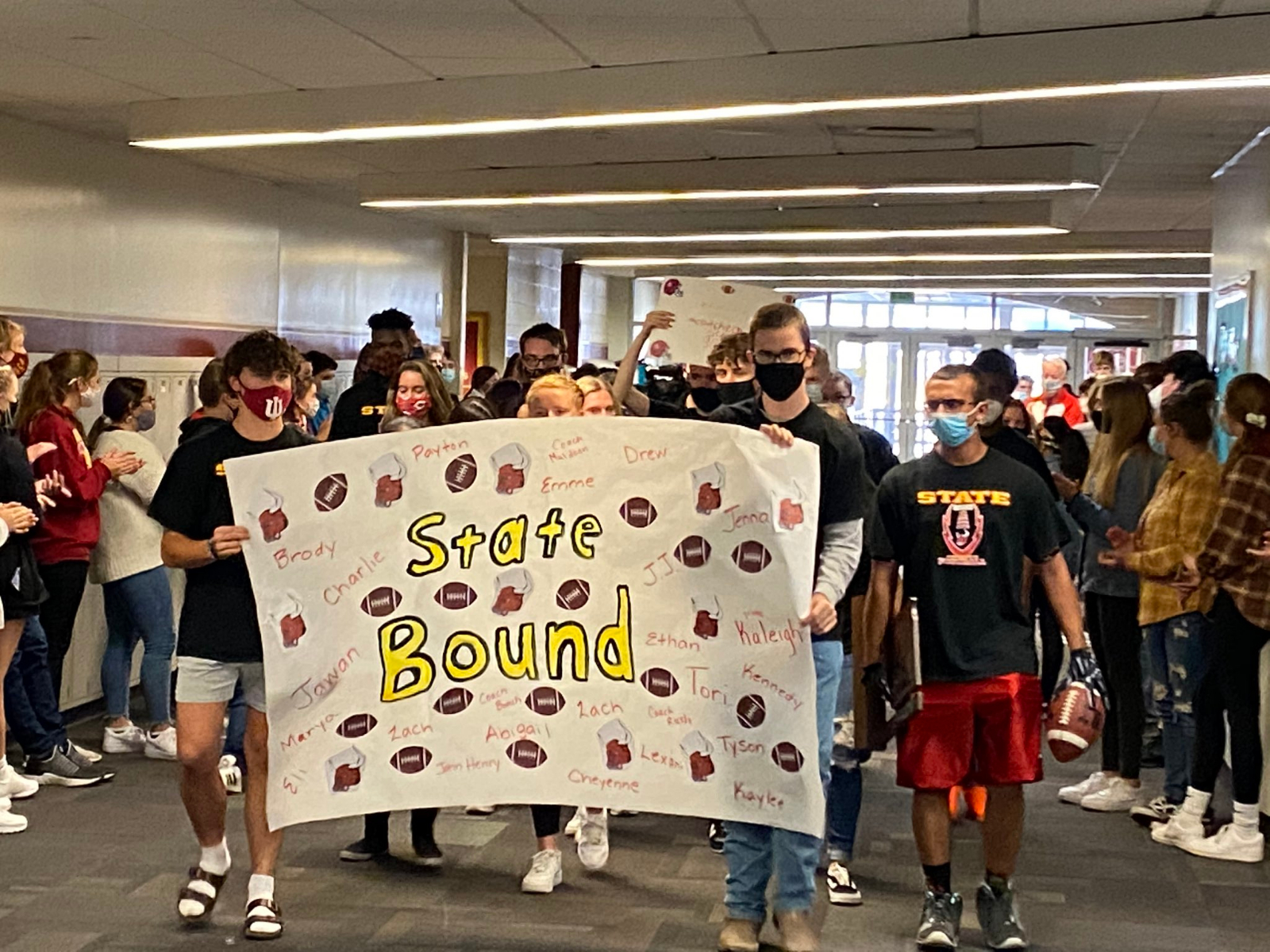 Once the Unified Mavs arrived at the Grand Park facilities, they were welcomed by a large contingent of proud McCutcheon fans ready to cheer on their team!  Having been in last year’s title game there was some familiarity with the surroundings amongst the veterans, which played a big part in the Mavs settling into the game.  However, Carroll brought a fast-paced misdirection gameplan that saw the Chargers march down and score the game’s first TD.  The two teams locked into a back and forth battle that saw great play after great play.  The first half did end with the Mavericks holding onto a slim 19 – 15 lead. 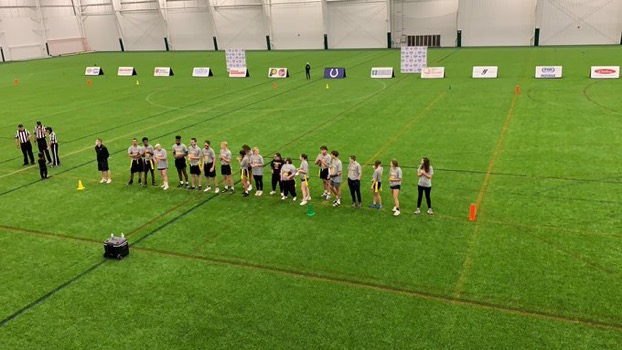 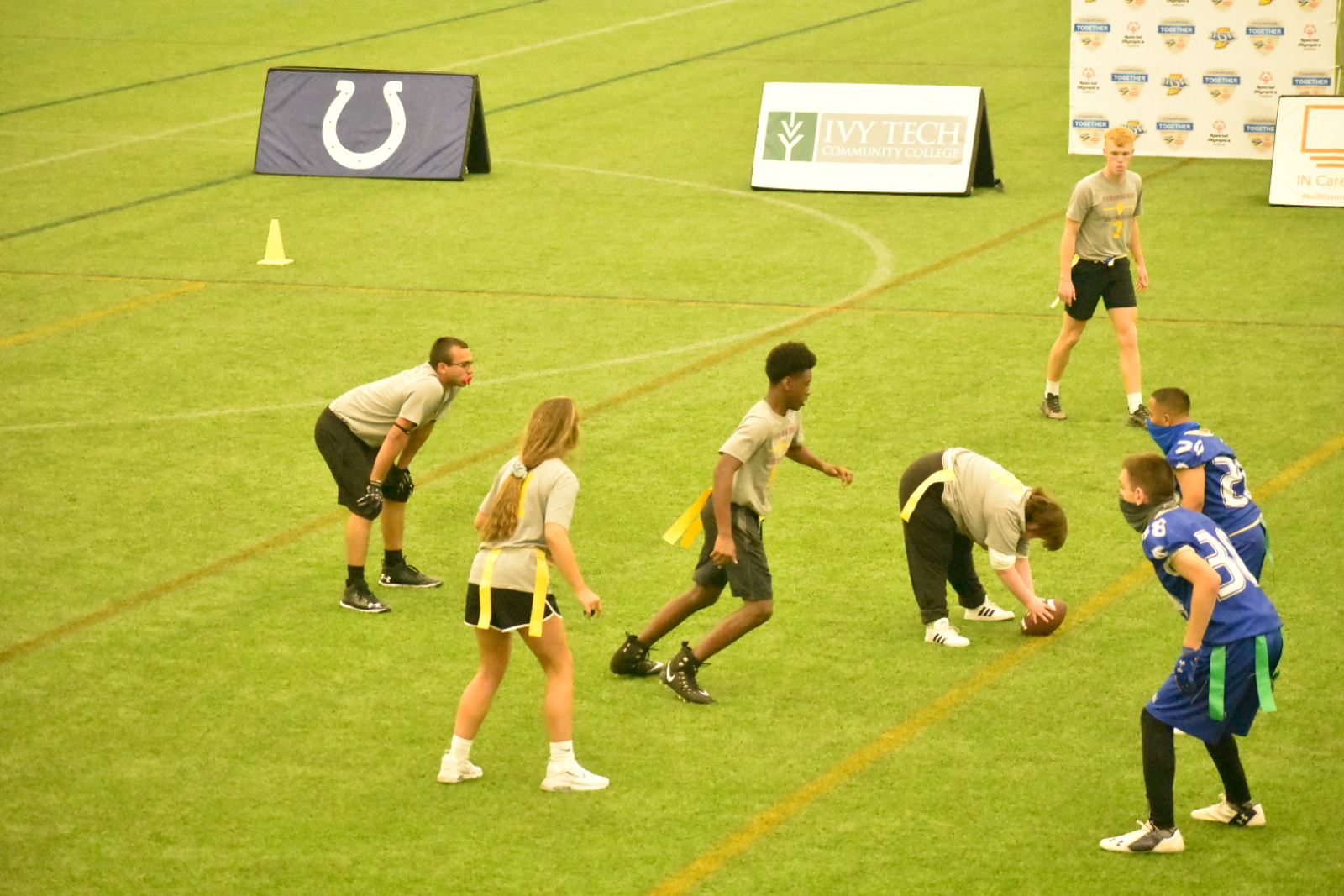 In the 2nd half, the Mavericks defense held Carroll to one score with only 10 minutes to play.  With the defense holding strong, sophomore Eli Swank connected on a highlight real touchdown to freshman Jewan Green to give the Mavs their biggest lead of the day, 36-21!  Junior, Jenna Lawson pulled in the 2-pt conversion to ensure the Mavs a dominant three-score lead. 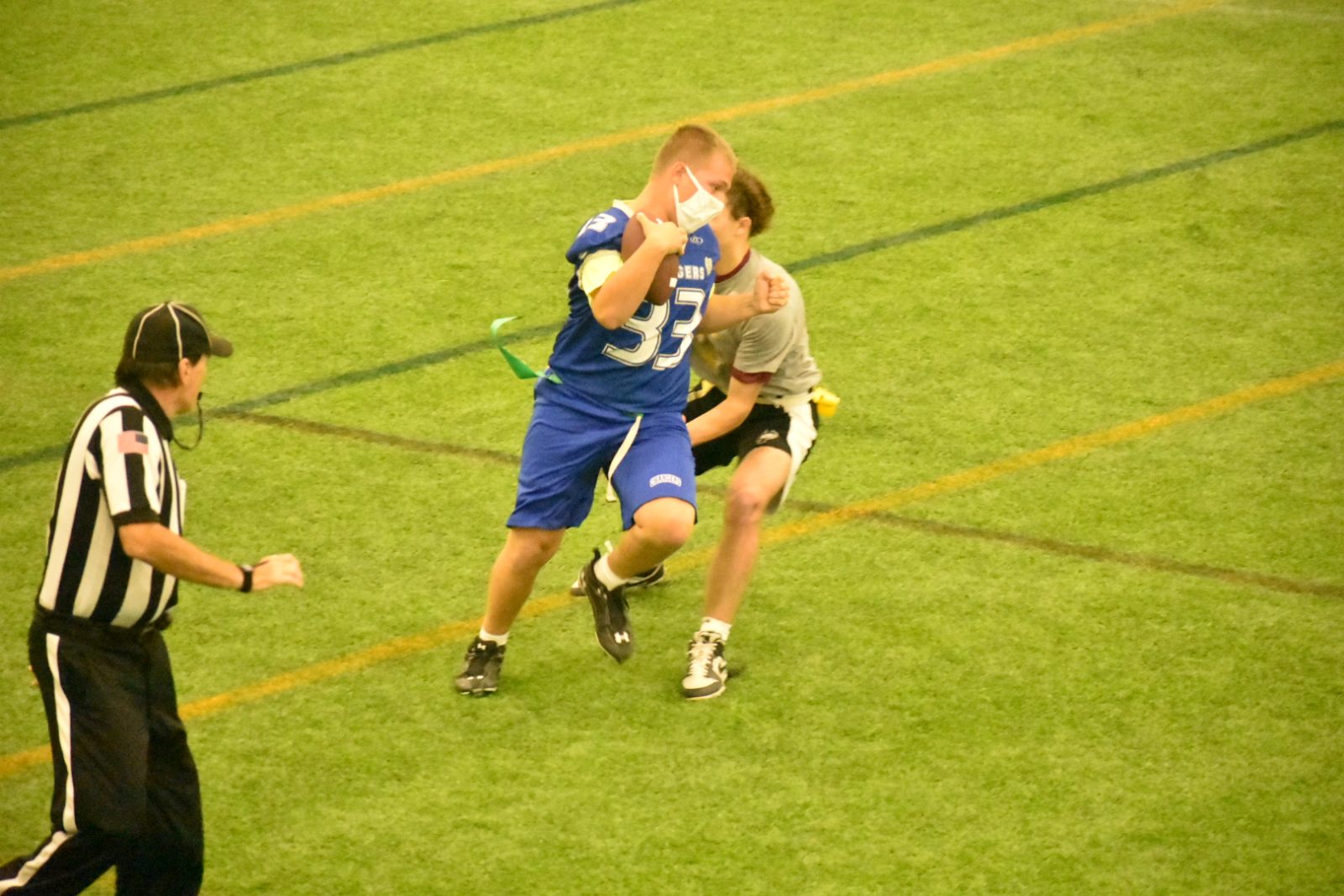 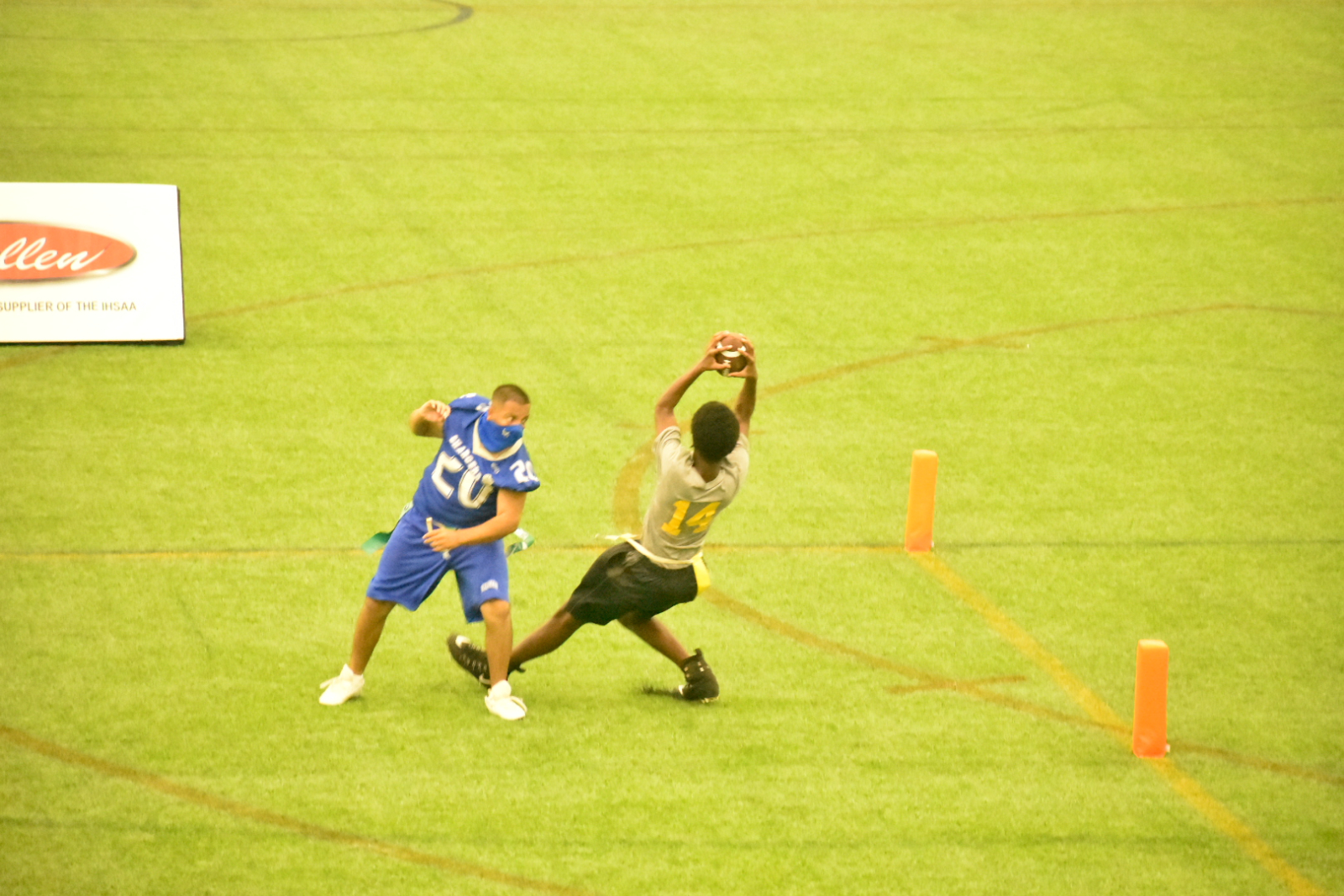 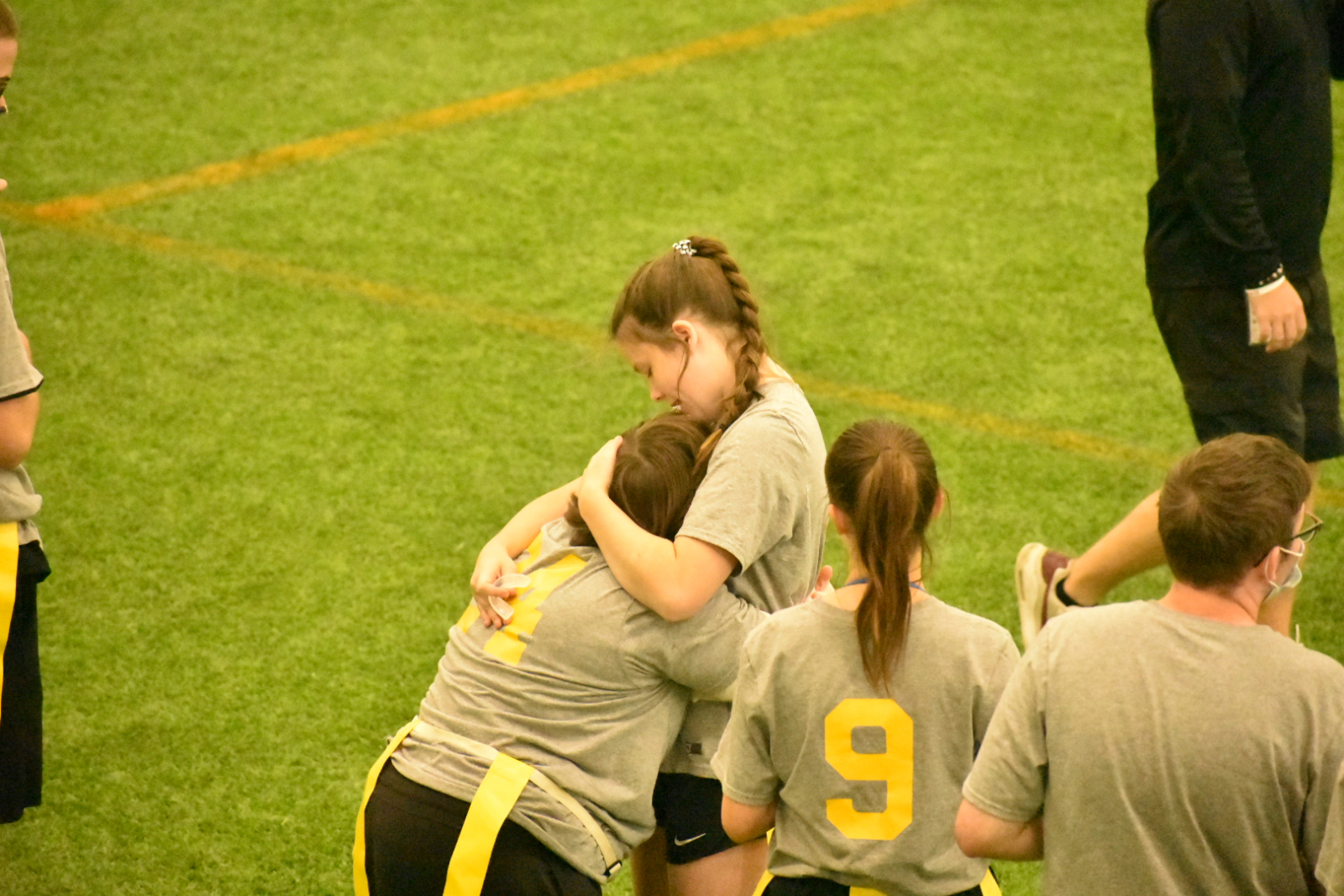 The FW Carroll Chargers would find the endzone two more times, but a late rushing touchdown by junior JJ Mallett sealed the deal on a McCutcheon Unified Football State Championship, with the Mavs winning 44 – 34!

Everyone that left the field that day felt encouraged by the sportsmanship and class shown by all the participants.  Once again, the Unified student-athletes reminded us all about the true meaning of sports.  Even though the Mavs and Pioneers received different trophies, they let it be known that they are all Champions Together! 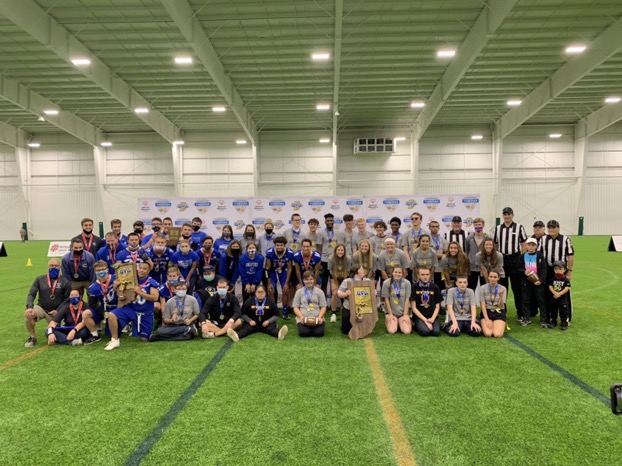 The Lady Mavs volleyball team has been red-hot as of late.  Heading into Saturday’s Sectional semi-finals, the Mavs had won 7 straight matches without dropping a set, including winning their 4th consecutive NCC Tourney.  Standing in their way of reclaiming their title as Sectional Champs were two familiar opponents; the Lafayette Jeff Bronchos and the Harrison Raiders.

The Championship match was a TSC battle, with the Mavs facing the Harrison Raiders (16-12).  Using their depth and talent, the Mavs again took home the Sectional title without even losing a set! 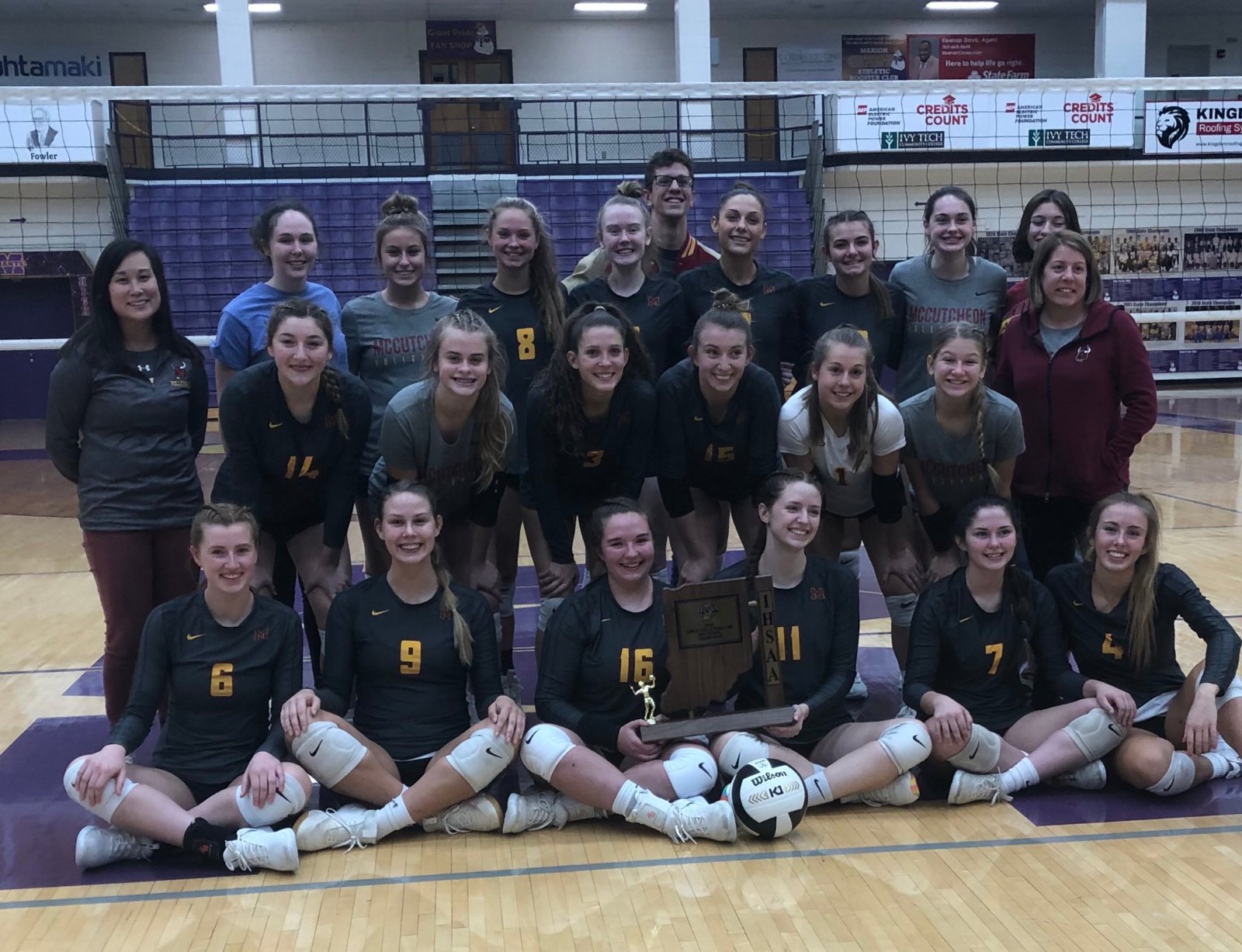 Congrats on your Sectional Championship, Mavs, and good luck on Saturday!

The McCutcheon Boys and Girls Cross Country teams both competed at the Harrison Regional.  With a perfect day to run 3.1 miles at the Tippecanoe Amphitheater, the Mavs took to the course with a desire to literally extend their post-season run.  The Lady Mavericks qualified for Semi-State with a 4th place finish at the Regional. Top finisher for the Mavs was Olivia Luban, finishing 6th, Ella Kanaby placed 12th, and Ashlyn Cheesman finished 19th! 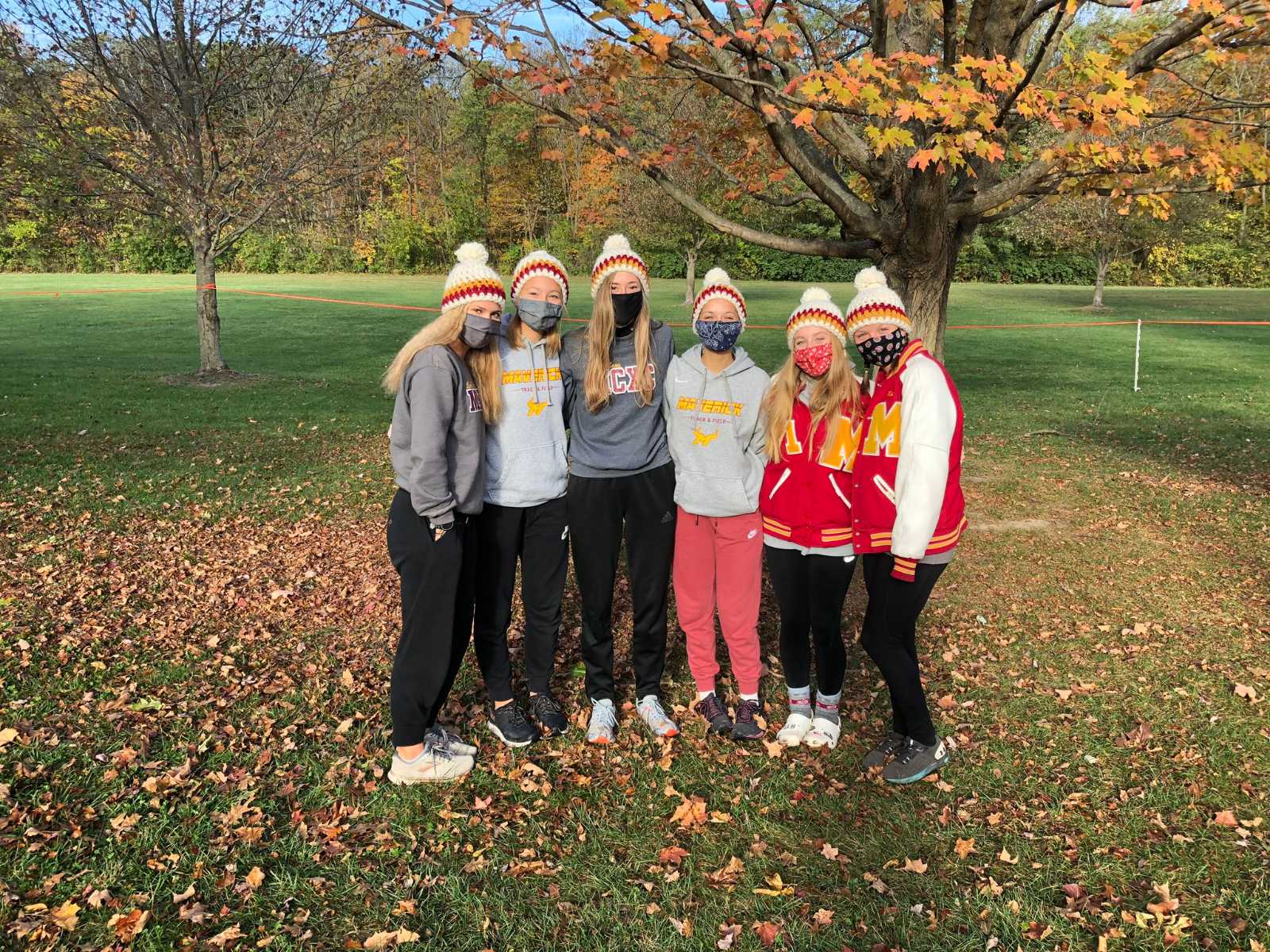 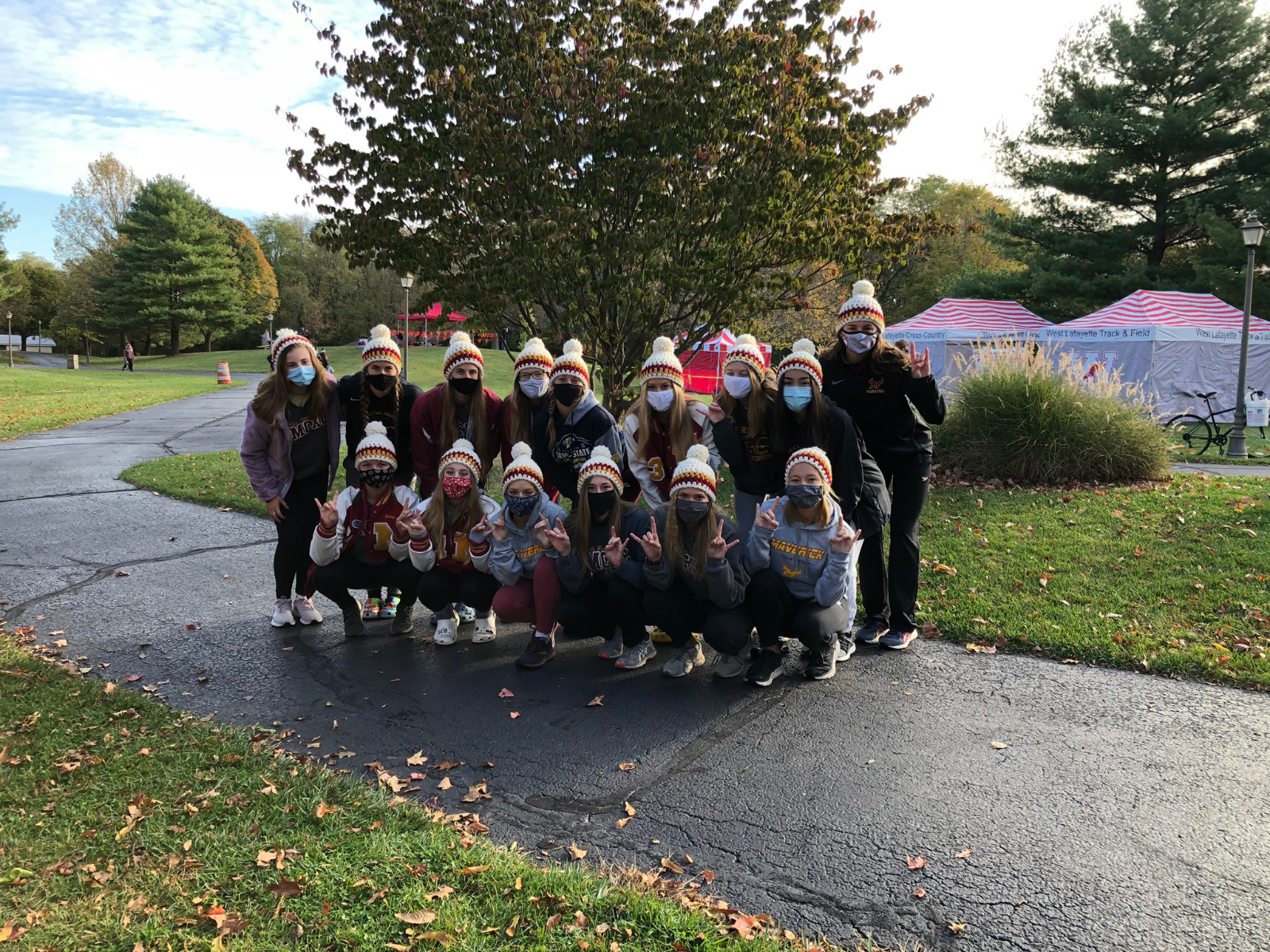 Boys’ McCXC finished 4th overall at the Harrison Regional, advancing to Semi-State for the 15th consecutive season! Finn Devlin was the team’s, #MavOfTheMeet, running a 17:51 PR.  Ethan Kerr (17:11) and Cary Swick (17:47) also has PR’s on the day.  The Mavs will be bolstered by getting team captain, Damian Sanchez, back in the line-up just in time for Saturday’s Semi-State meet at New Prairie High School! 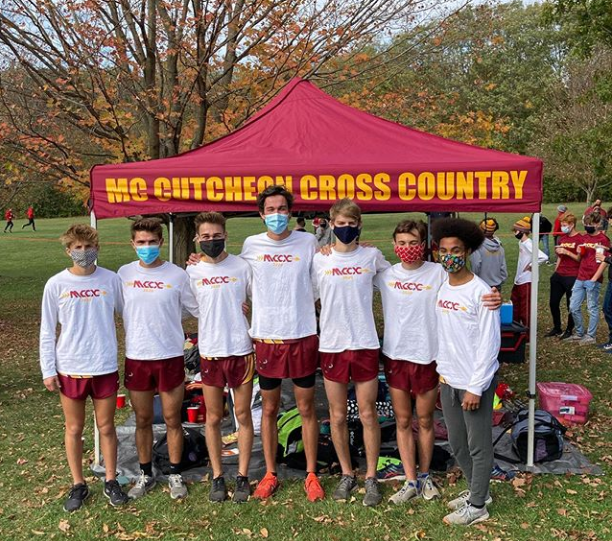 The McCutcheon soccer team (7-5) took to Kokomo High School for one of the more competitive Regionals in the State.  First up for the Mavs was a matchup with a familiar school…FW Carroll.  The #7-ranked Chargers (15-3-2) and their high powered offense poised a tough challenge for Coach Boyd Wheeler’s squad.  The Mavs proved up to the challenge, playing the Chargers to a 0 – 0 tie at the half.

The start of the 2nd half played out much like the first half, but with less than 20 minutes left to go in the game, the Chargers drew first blood, taking a 1 – 0 lead with only minutes left to play.  With their season on the brink, senior Alex Gutierrez crossed in a nice ball to McCutcheon’s leading goal scorer, Alan Bernardez, who sent home the equalizer with only 14 minutes left in the game.

The game then extended into Penalty Kicks to see who would play the Fishers Tigers in the Regional Championship.  However, the magic ran out for the Mavericks as they lost the PK round 4-2 to end their season.  It was a great run for the team, and the Seniors left the field holding their heads high knowing that they gave it their all.  Congratulations on the season, Mavs, our 2020 Sectional Champs!