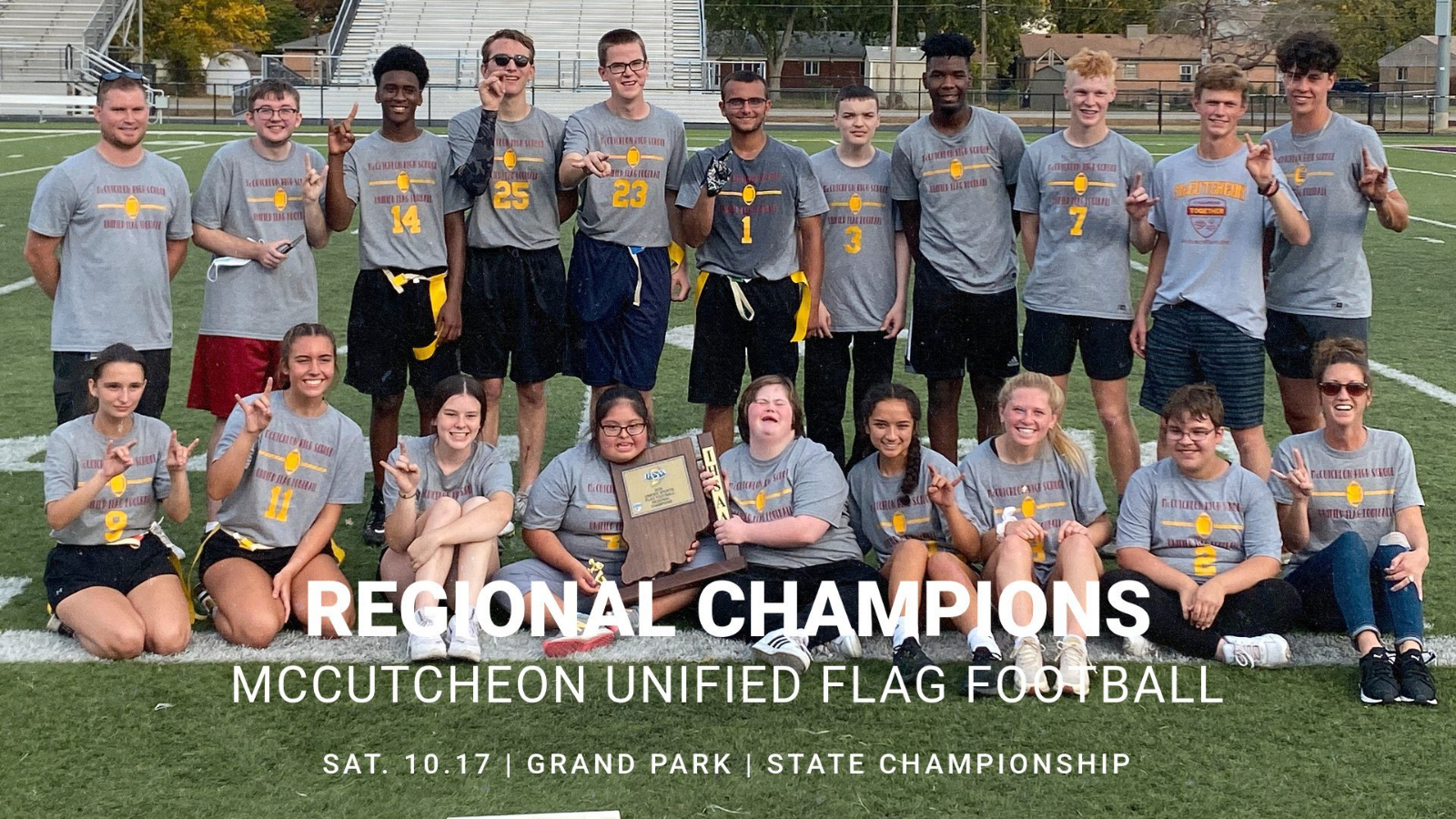 Early Saturday morning, many Maverick student-athletes loaded up on buses in the unseasonably warm autumn air and scattered across the state to represent McCutcheon in the sports that they love.  Unified Football, Cross-Country, Volleyball, and Soccer all hit the road with tournament mindsets and win or go home scenarios looming.  Here’s a quick breakdown of all the action that happened on what ended up being a McCutcheon Championship Saturday!

The Unified Flag Football team looked to win their 2nd Regional title in as many years as they traveled to the loaded Brownsburg Regional Tournament.  First up for the Mavs was a matchup with the Carmel Greyhounds.  The Greyhounds brought an organized gameplan that provided a big-time test for the Mavericks.  While the gameplan looked good on paper, it was no match for the Maverick’s aerial attack.  Using the deep ball and several accurate passes, McCutcheon outlasted Carmel 42-32 to advance to the Regional Championship. 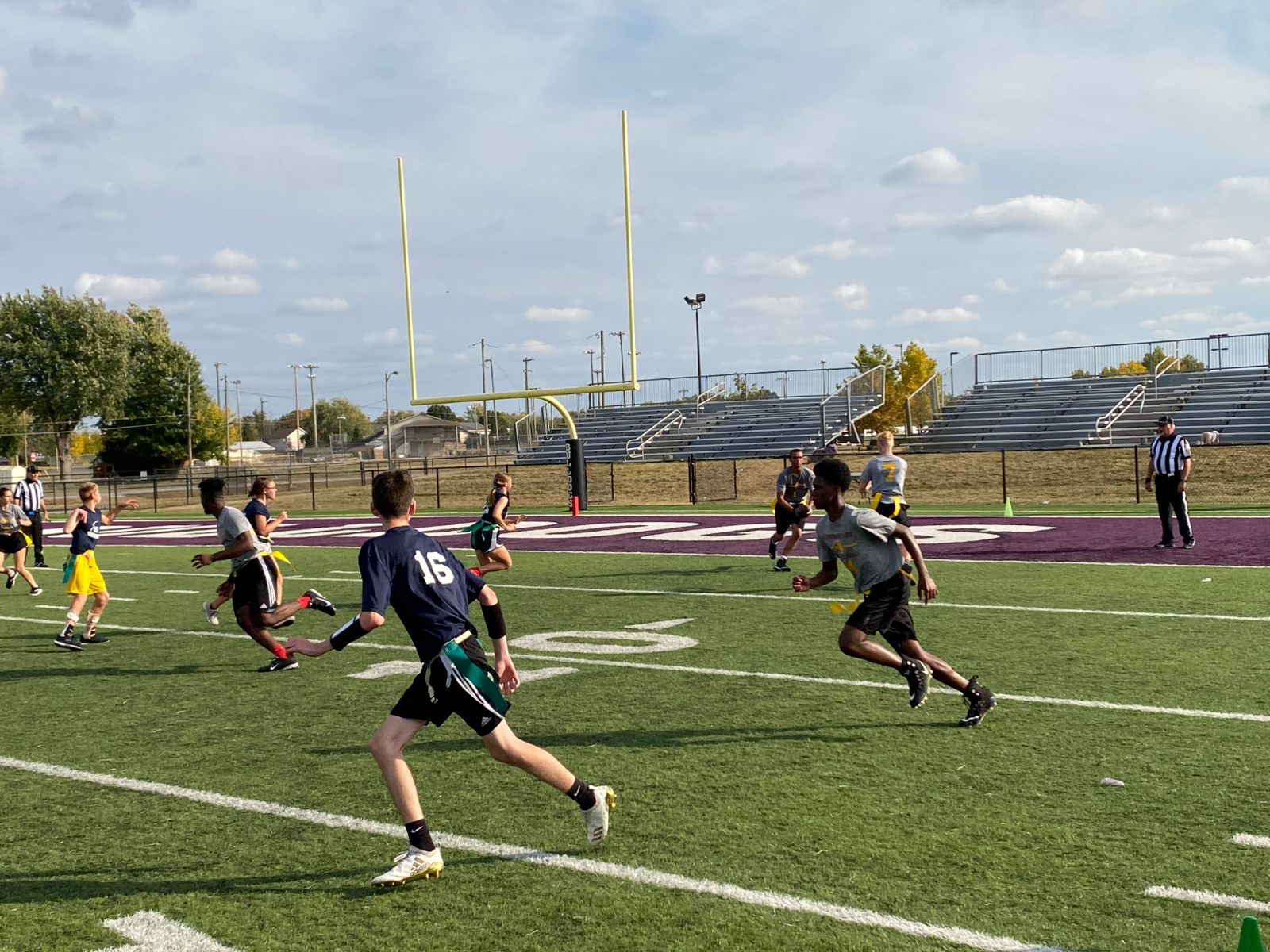 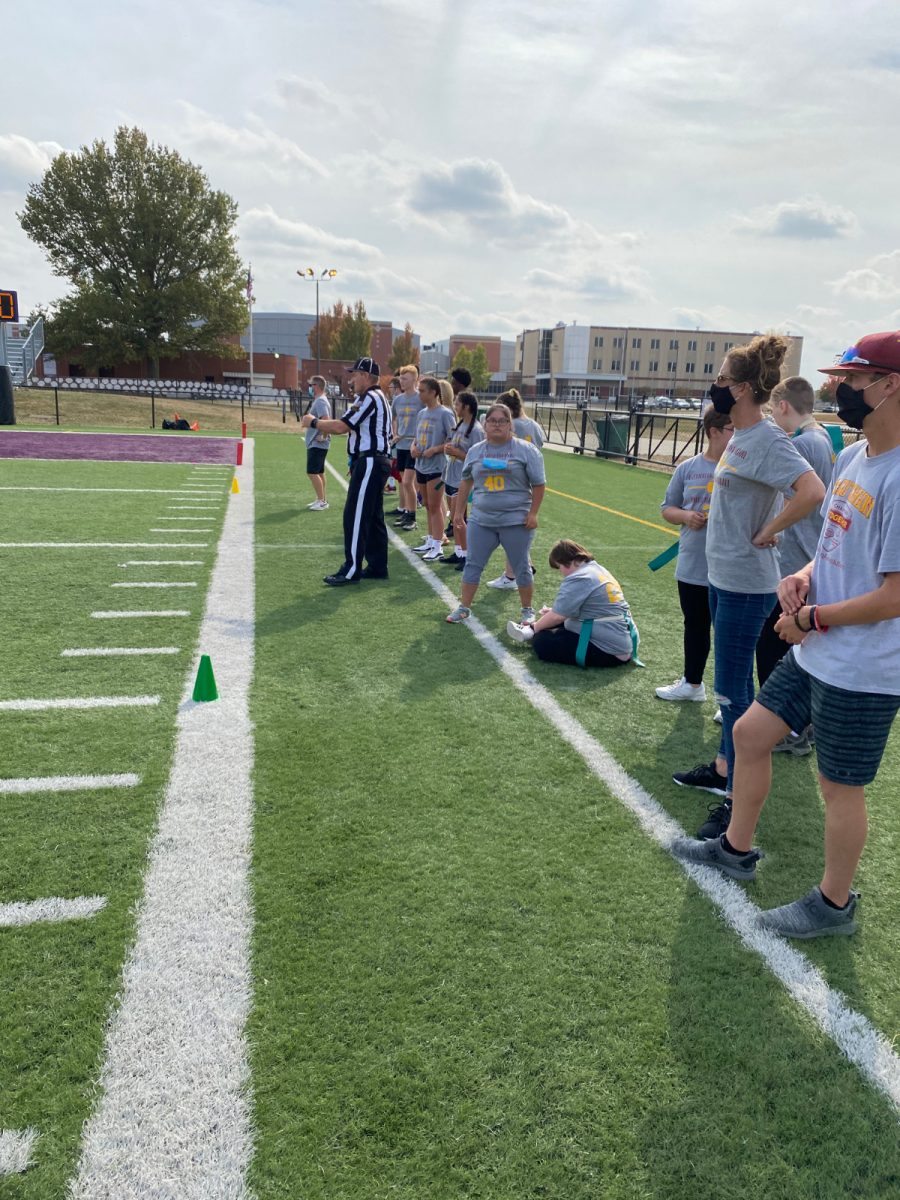 The Regional Championship was a rematch of last year’s State Championship with the Mooresville Pioneers standing in the way of another McCutcheon State Title game.  McCutcheon wasted no time taking an early lead with a big play TD by senior Ethan Shackelford.  Mooresville did keep pace and found the endzone a couple of times late in the 1st half.  The matchup of the game was Mooresville’s towering 6’6″ receiver versus McCutcheon’s junior standout, JJ Mallet.  Despite Mooresville’s best efforts they still trailed McCutcheon 33-26 at the Half.  During the second half, the Mavs offense struggled with turnovers, giving the Pioneers a chance to tighten the score with a couple of scoring drives.  As the clock started to get late in the game, and the weight of moving onto the State Championship on everyone’s mind, the Mavs found themselves needing one last scoring drive with 3 minutes left to play.  With junior Zach Branz in at QB, he was able to scramble and avoid a sack, then found sophomore Eli Swank open for a nifty 20-yard touchdown pass!

The old adage says defense wins championships, and that ended up being the case for this Maverick team.  A late interception with 1 minute left to play by freshman Jewan Green ended up being the proverbial nail in the coffin, as the Mavs ran out the clock to win their second Unified Flag Football Regional by the score of 45-38! 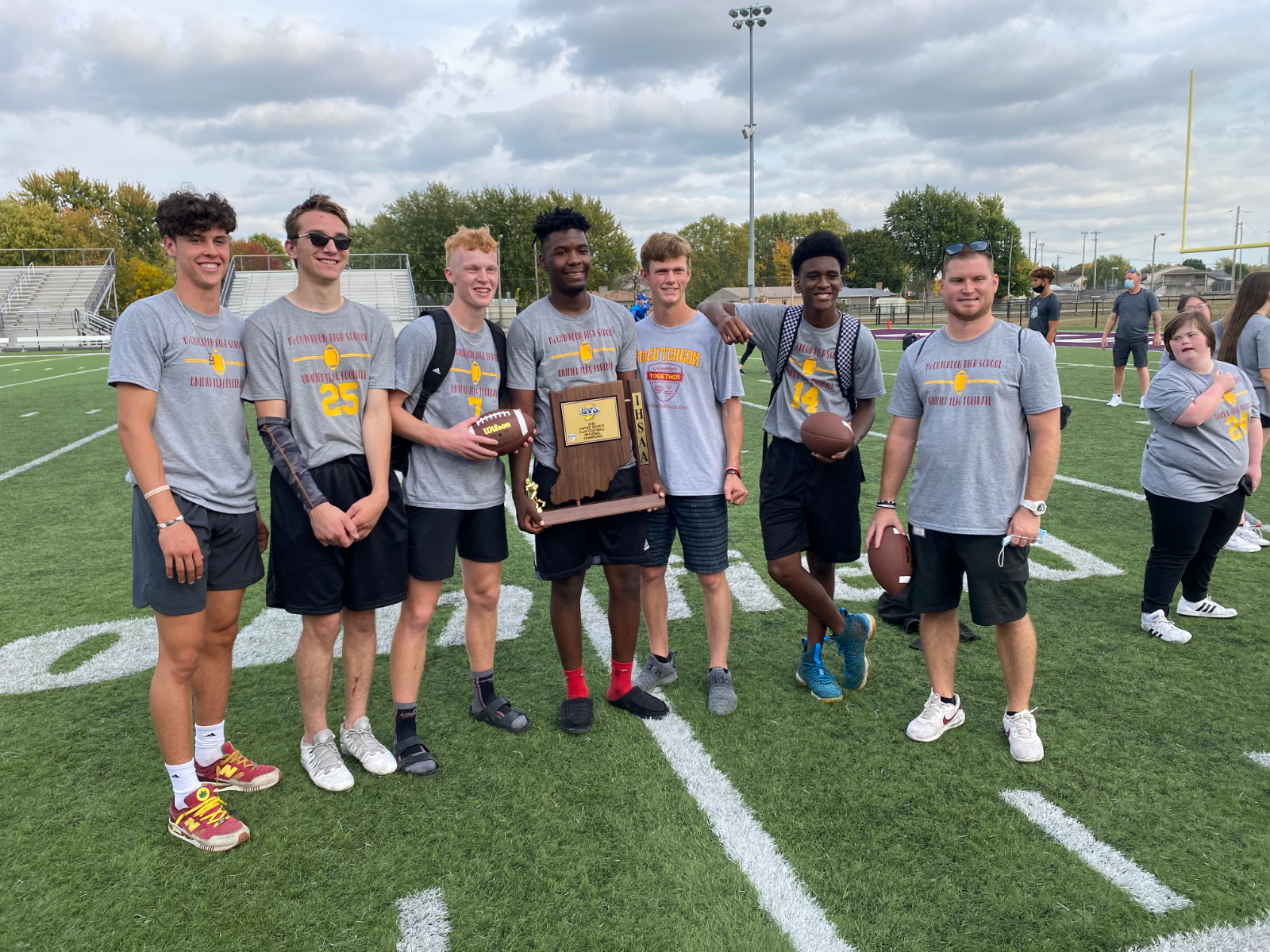 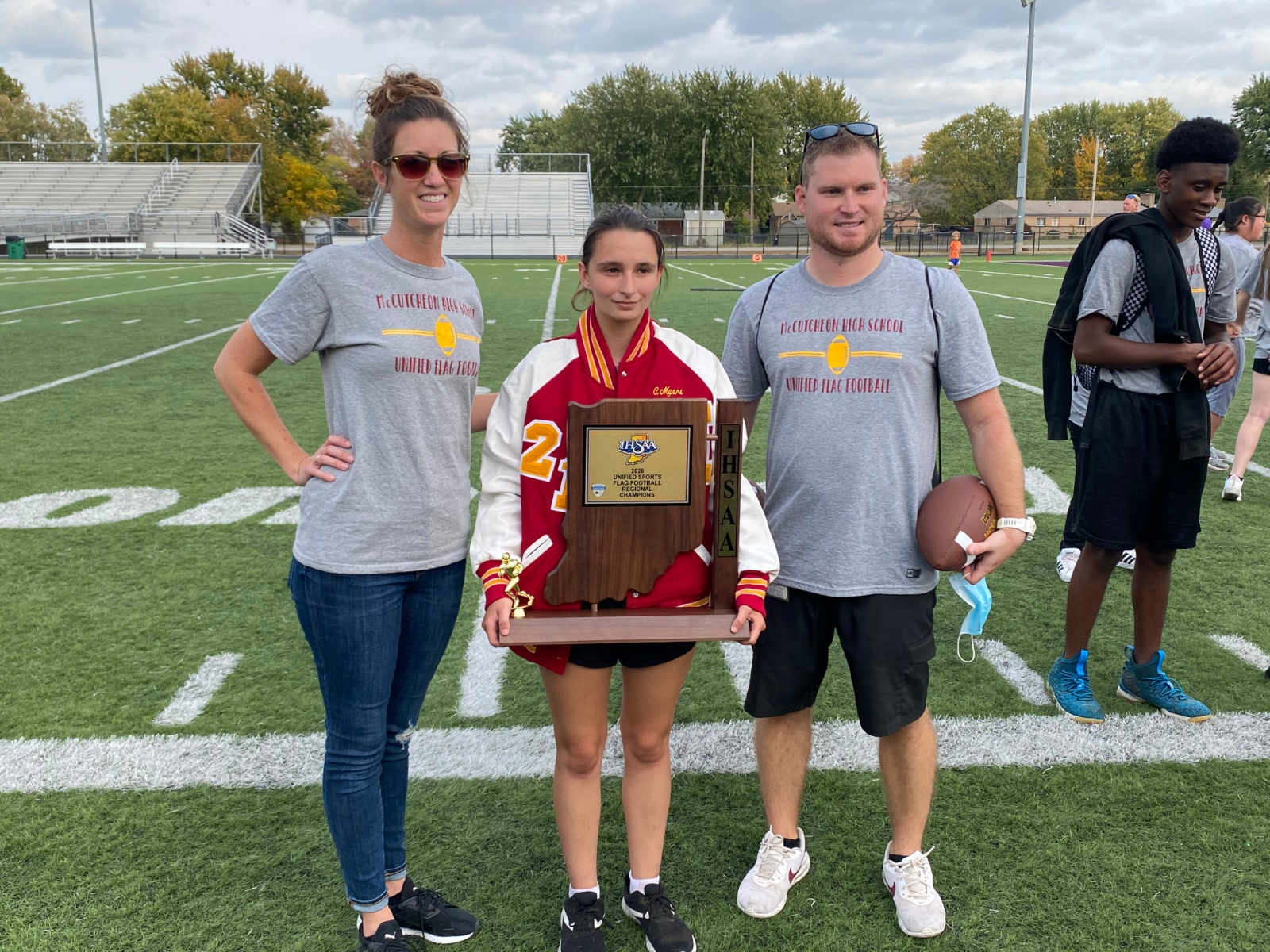 The Unified Mavericks now face the FW Carroll Chargers at Grand Park in Westfield.  The State Championship game is set for Saturday (10.17) at Noon.  The game will be streamed for fans on IHSAATV.org #GoMAVS

The final Sectional game was bound to be an exciting matchup under the lights of Ellison Stadium with the Mavs facing off with a quick and aggressive Logansport Berries team.  Logansport was fresh off an upset of Harrison in the Semi’s.  The Mavs came into the title game with only one match under their belts after a two-week quarantine, a 7-nil victory over Jeff.  During the regular season, the Mavs knocked off Logansport, but that was back in late August.  This go-around, the Berries came out firing and took a quick 1-0 lead after a nice header goal off of a corner kick.  Luckily for the Mavs, they have strong senior leaders who ensured that they would not be trailing for long.  Jake Fultz scored two goals in the last minutes of the 1st half, with Alan Bernardez assisting on one of the goals.

Logansport’s talented midfielder, Juan Perez, was a tough man to match-up with all night.  The senior Berry had already tallied 47 goals this season and was able to score an equalizing goal with 25 minutes left in regulation.  As the Mavs continued to pressure the Logansport defense, it was a break-away pass to Alan Bernardez from Jake Fultz that allowed the Mavs to take a 3-2 lead with 3 minutes left to play.  Bernardez’s go ahead goal of the night didn’t finish the scoring for the Mavs.  With the clock closing in on a McCutcheon Sectional win, sophomore Ethan Gutierrez hit the back of the ol’ onion bag one more time to ensure a 4-2 Maverick victory. 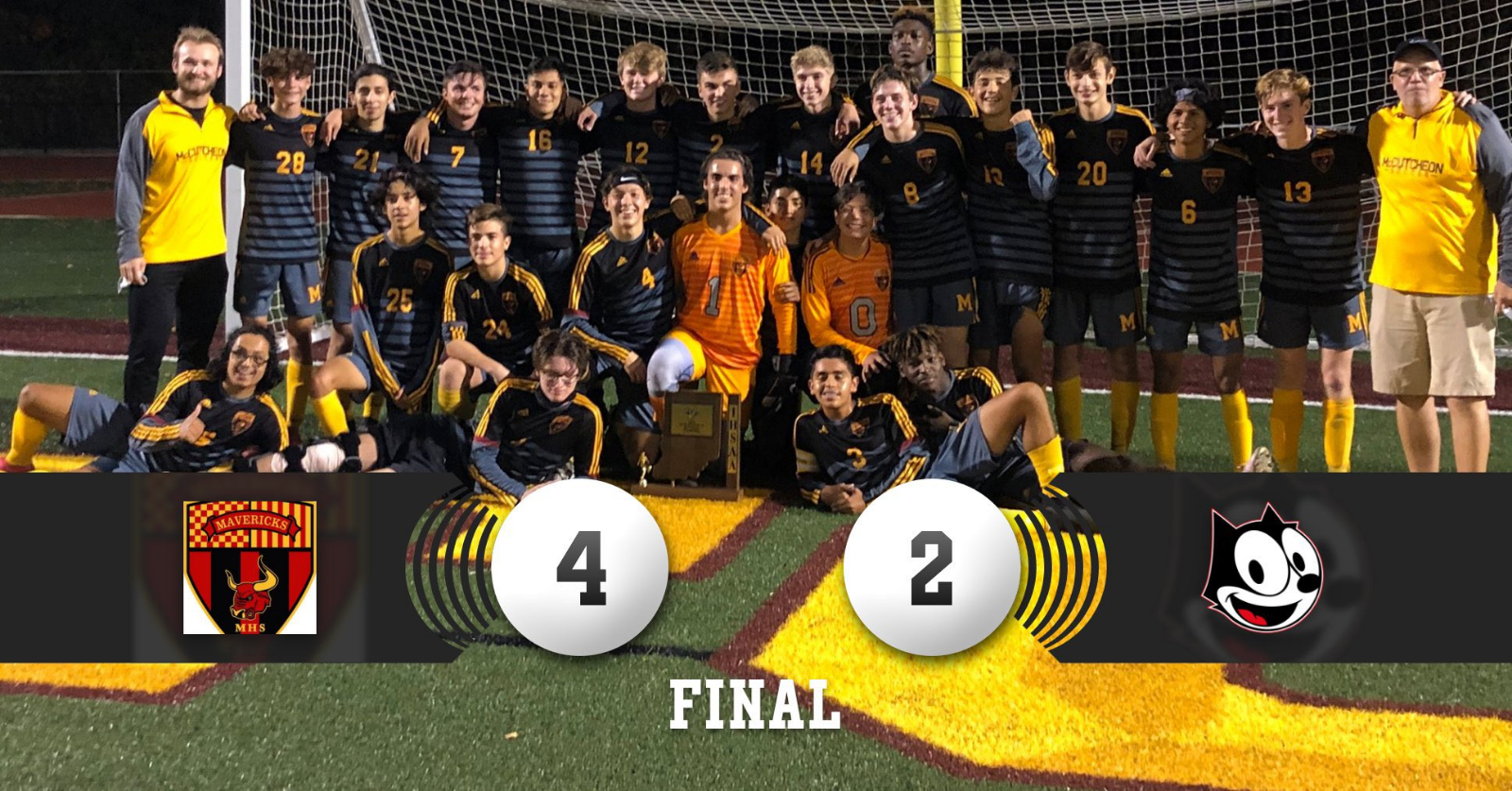 The Lady Mavs have had a stranglehold on the NCC trophy the last few years, and the 2020 version of Coach Sutter’s squad was again the favorite at this season’s NCC Tournament.  The Lady Mavs traveled to the historic Muncie Central Fieldhouse to vie for their 4th consecutive NCC title.  First up for the Mavericks (17-7) was a quick straight-set victory over Logansport (14-17)

The Championship match was a TSC battle, with the Mavs facing the Harrison Raiders (16-12).  Using their depth and talent, the Mavs took home the NCC title without even losing a set!

Friday night was Homecoming for the Mavericks.  It was an absolutely perfect Fall night, with the temperature at kick-off hovering around the high 70’s.  It was an ideal night for the Lafayette Corvette Club to make their lap around the track, with Royalty in tow, in front of the near-sellout crowd as the Mavs hosted the Muncie Central Bearcats.

“Throwback” was the HOCO theme, and one patron, in particular, could throw it back way farther than most in attendance.  McCutcheon’s legendary bus driver, Gene Davis, made his first public appearance in nearly 9 months as he battled back from a stroke he suffered earlier in the year.  Gene was warmly greeted by the McCutcheon faithful who gave their loyal friend a standing ovation.  Gene stayed for the whole game and said he was “incredibly grateful” for all the love and support that the McCutcheon student-athletes and their families have shown him over the years. 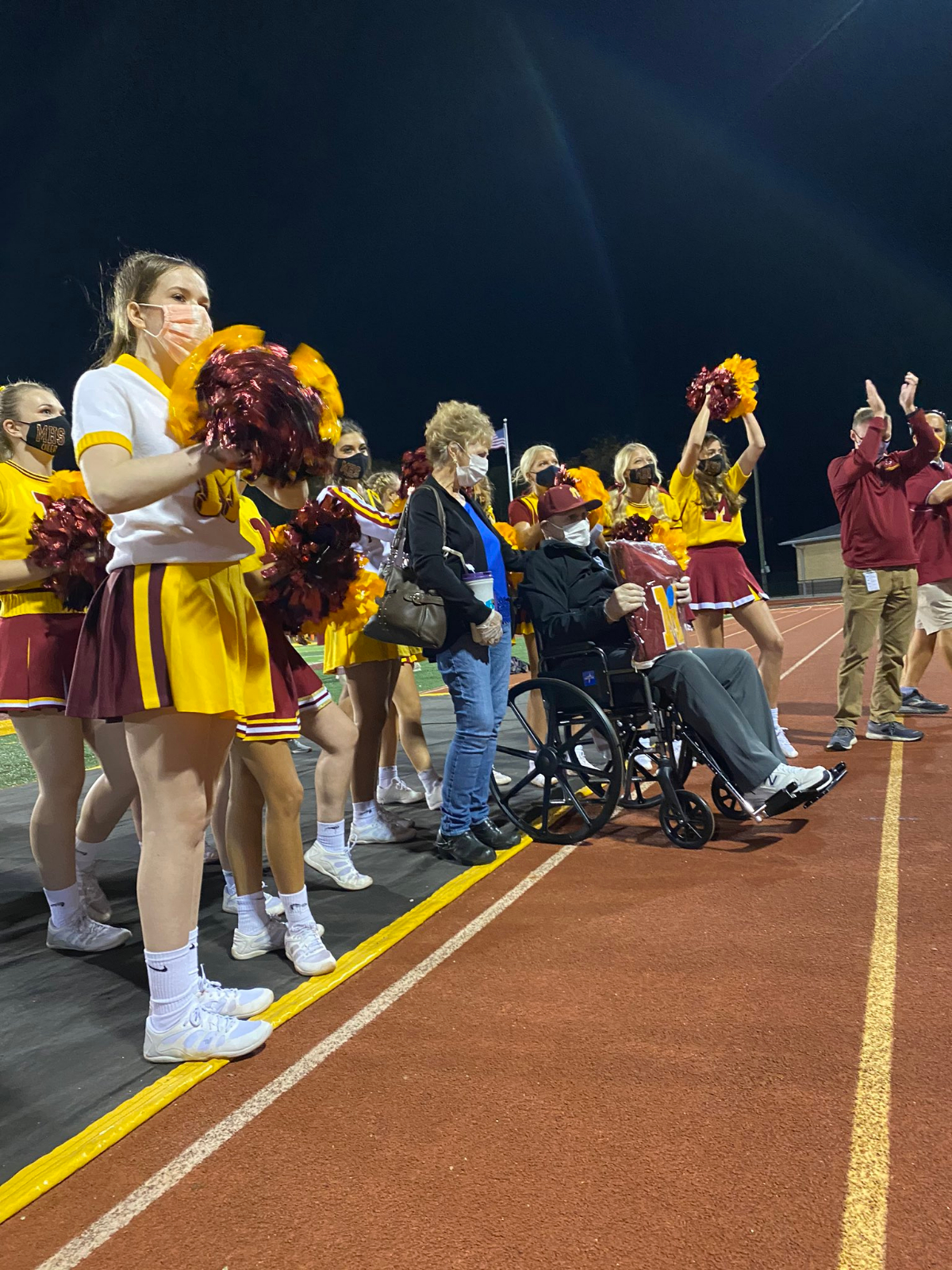 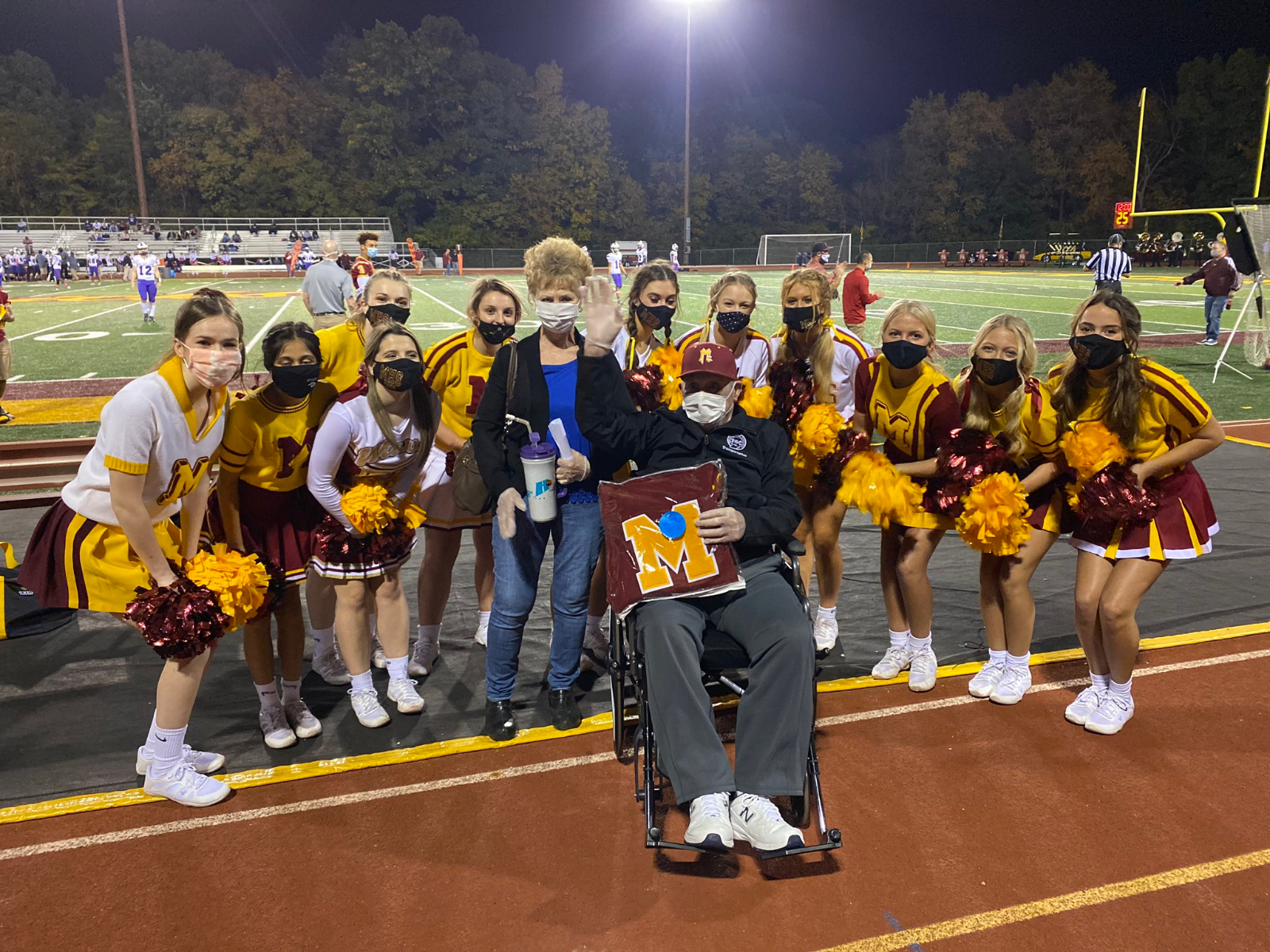 Gene, and the rest of the Maverick faithful, were also treated to a near-perfect game by Coach Frauhiger’s squad.  Even with a running clock in the 2nd half, the Mavs were able to put up 9 touchdowns in their 56-7 route of the Bearcats!  Senior WR, Josh Garcia, who has led the Mavs in receiving this year, found pay dirt on 3 different occasions.  Sophomore signal-caller, Ethan Smith, had his best game of the season going 11-14 for 277 yds & 3 TD’s.  RB Brad Gagnon had another 100+yd performance, tallying 128 yds on 18 carries and 2 TD’s.  The offense wasn’t the only group scoring, with senior LB’s Zaiden Zurfas and Manuel Magallanes scoring TD’s off of turnovers.  Senior DT, JT Lehr was a mainstay in the Bearcat backfield, as he recorded 9 Tackles with 4 of them being TFL’s.

It wouldn’t be Homecoming without a King and Queen being crowned.  With a truly special moment that most in attendance will remember for a long time, seniors Payton VanLandingham and Emilio Reyes were crowned this year’s King and Queen.  WTHR ran the story on their newscast in case you missed it.  It was a great night for the McCutcheon community and one that was emblematic of McCutcheon’s commitment to positivity, respect, and inclusion for all. 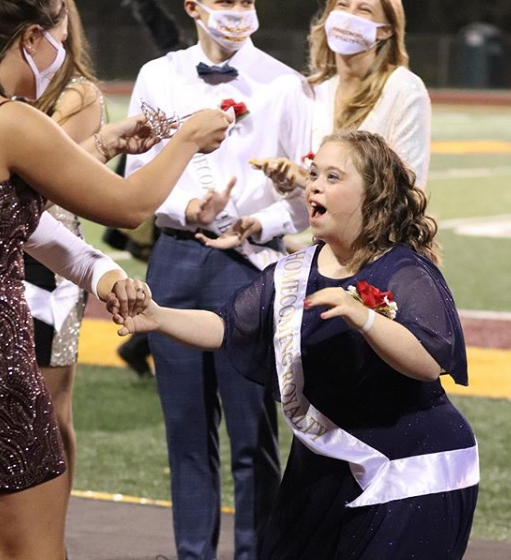 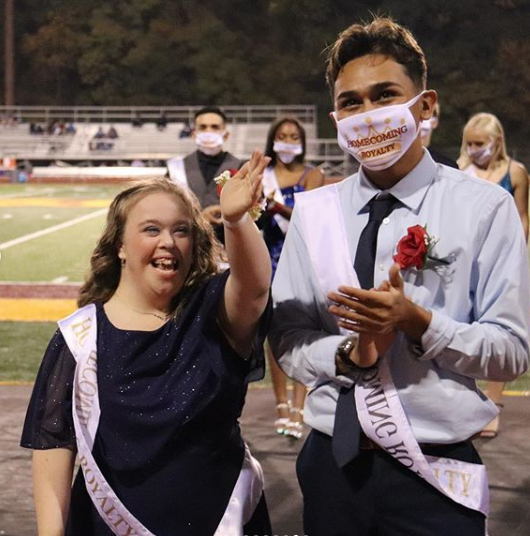 The Boys and Girls XC teams traveled to the Tippecanoe Amphitheater on Saturday for their Sectional Meet.  The top 4-teams at this event move on to the Regionals, which Harrison hosts at the same site.  Both teams advanced with PR runs by athletes on both teams! 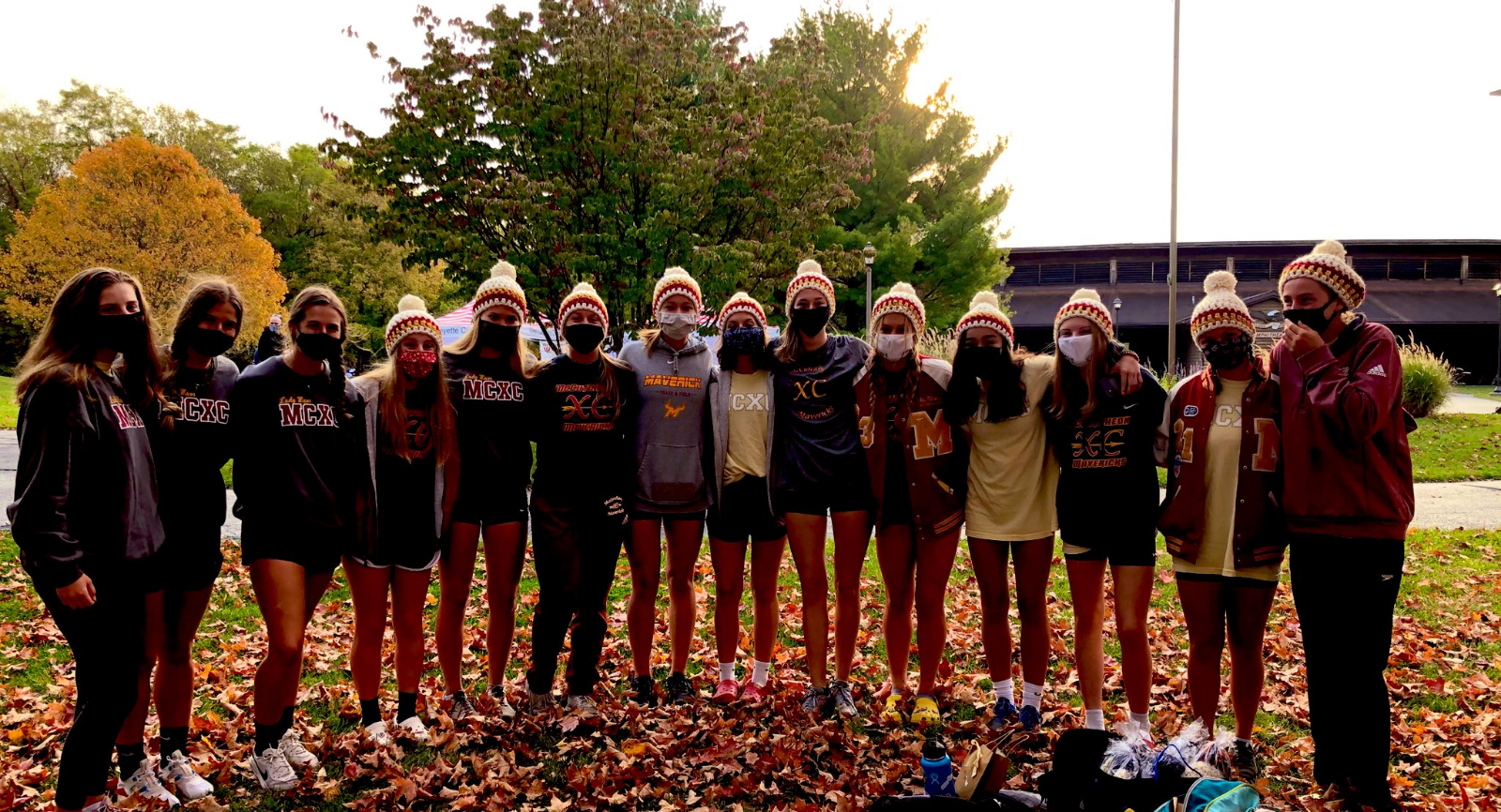 The Boys XC team placed 4th overall, which was a tough task as top-runner, senior Damian Sanchez, was ruled out for this meet due to a quarantine issue.  With their top runner at home, the Mavs needed to step-up to keep their post-season alive, and that’s just what they did. 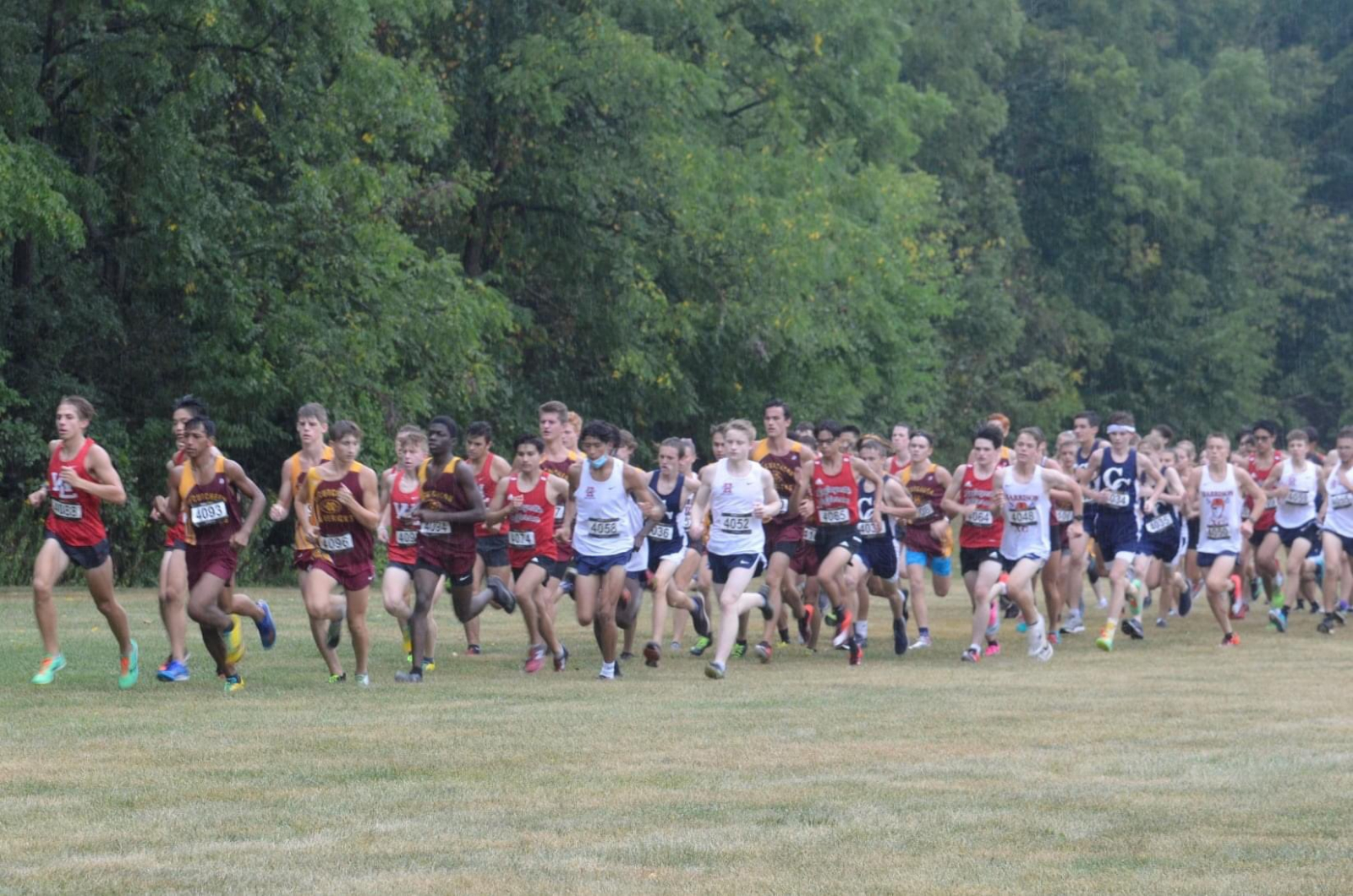 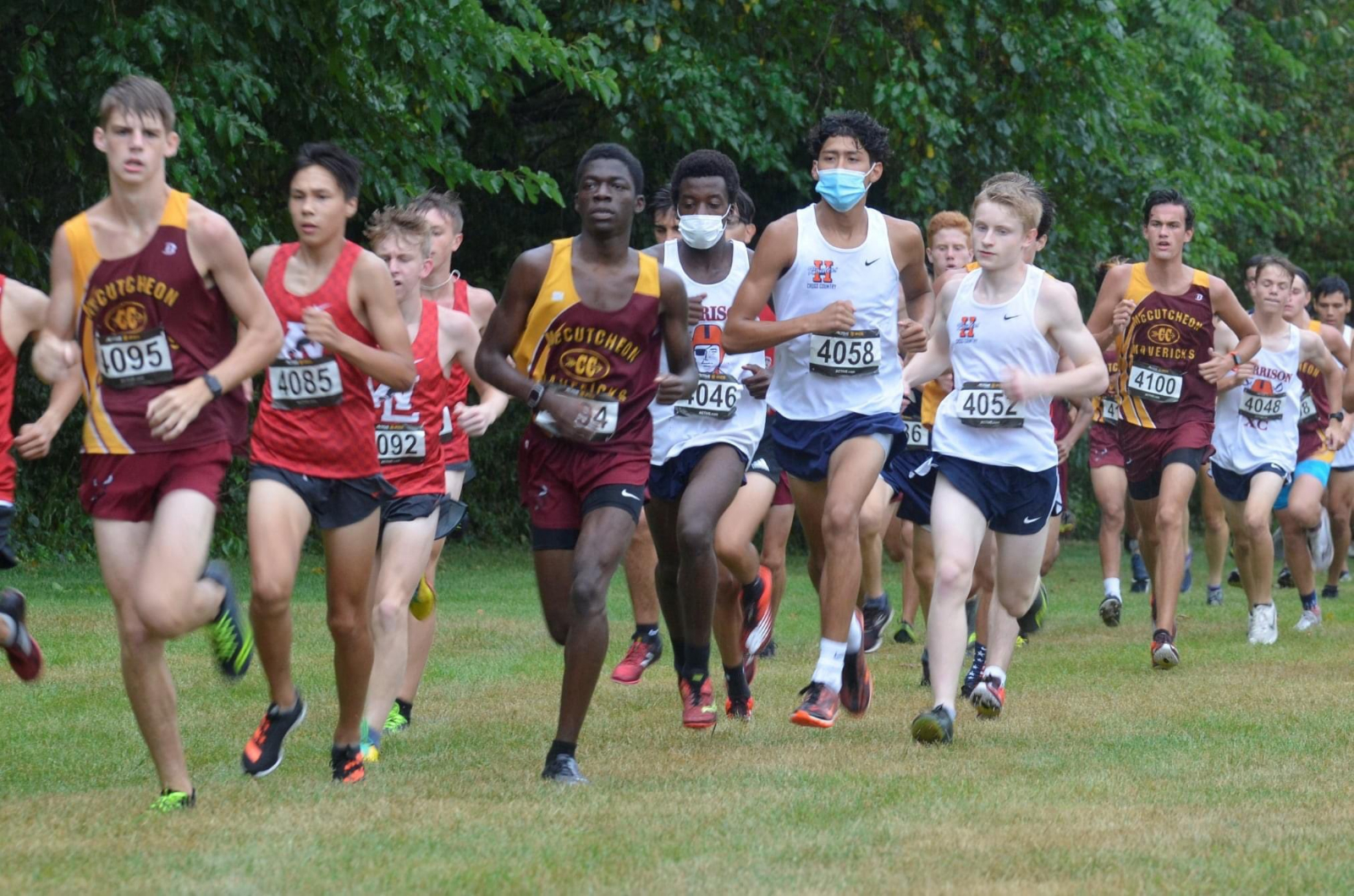 Both squads now have one more week to prepare for next Saturday’s Regional.  Race times are set for 10:30 AM.  Good luck Mavs!

The Lady Mavs soccer team has had a tough go of it this season.  Not on the field of play, where they have competed in every match this season.  But the Lady Mavs have had to spend a month of the season in quarantine.  Coach Branko’s squad has done a remarkable job keeping things in perspective and trying to control what they can control.  As Sectional #5 started last week, the Lady Mavs (5-5-1) were tuned up and ready to try and repeat as Sectional Champs.

On Tuesday, the Lady Mavs faced a tough Lafayette Jeff team that had just knocked them off a week prior.  Looking at the Sectional as a new season, the Mavs were focused to not end their year in the first round.  McCutcheon was able to win the revenge match off the foot of senior Katie Buckles.  Buckles scored a deep goal off of a throw-in, that ended up being the lone goal of the match!

On Thursday, the Lady Mavs were tabbed to take on the Logansport Berries.  On this night, McCutcheon brought their A-game, securing a 3-0 shutout and a Sectional Championship birth.  Senior Bryn Roberts scored and assisted on two other goals. Senior Bianca Ramirez and sophomore Mya Van Hook scored the Mavs’ two other goals.  Senior goalkeeper, Olivia Smith, had 7 saves on the night.

Saturday, McCutcheon played their rivals, the Harrison Raiders.  Last year’s Sectional Championship was an all-time classic, with the Lady Mavs taking home the title in a PK shootout.  This year’s edition of the McCutcheon vs Harrison match-up was not that close, with the Lady Mavs getting shutout 0-5.  The Lady Mavs were on the defensive side of the field most of the match but competed till the very end.  The Seniors that ended their soccer careers at McCutcheon have left the program in a great place and have been fantastic stewards of MavPRIDE!