It was a beautiful weekend in late August, as the Mavericks headed into their 3rd full week of IHSAA competitions.  While COVID concerns still loom, it was great to see so many athletes complying with their new safety protocols and to see so many fans socially distancing and masking up in an attempt to keep this universal opponent at bay.  Here’ a quick breakdown of all the weekend’s action:

This past Saturday morning was the annual Maverick Stampede.  Missing were the large throngs of fans and our Pride of McCutcheon drumline to set the atmosphere.  Still, the Mavericks found plenty to celebrate with their 1st (Boys) and 3rd place (Girls) team finishes being capped off with a Senior Day ceremony after the competition.

Girls – The Lady Mavs finished 3rd overall, and were paced on the day by sophomore Olivia Luban (4th overall).  Seniors Ashlyn Cheesman (10th) and Caroline Hanback (16th) were the Mavs other top finishers.  So far, the Lady Mavs have captured a 1st, 2nd, and 3rd place finish in their first 3 competitions.  Coach Ulrich has been very appreciative of her “Senior 6” and was very excited to celebrate their accomplishments at the Senior Day ceremony. 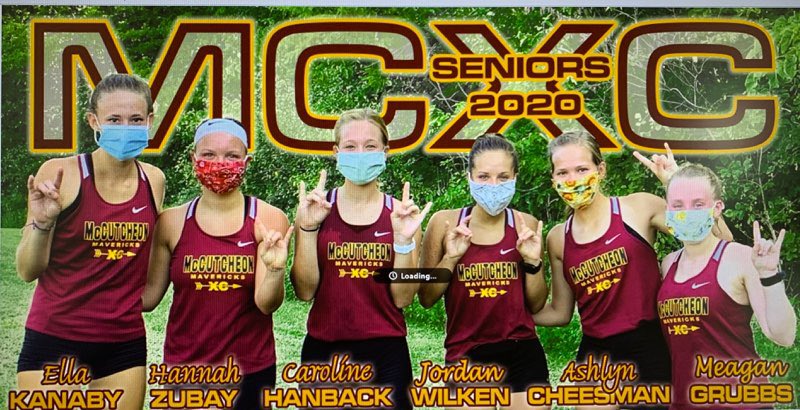 The Mavs exemplified the label of “student-athletes” on Saturday as many of the tennis players had to first ace the SAT prior to their 1 PM matchup with the Lake Central Indians.  The Mavs fell 2 – 3 to a talented Lake Central team.  Winners for McCutcheon were Gavin Dardeen (#1 Singles) and the # 2 Doubles team of Landon Waeltz and Blaec Lessley. The Boys will celebrate their Senior Night this Tuesday (9.1.20) when the Mavs host the Lafayette Jeff Bronchos (4:30 PM).  If you plan to attend, we ask that you socially distance yourselves, and mask up for the Mavs!

The Mavericks hosted their first home football game of the Fall when they welcomed the #5 West Lafayette Red Devils (3A).  The new facelift renovations of Ellison Stadium were on full display, but the new bleachers were only partially filled due to COVID Hosting Protocols.  Despite the smaller than usual crowd, the energy and excitement of Friday Night football were still palpable!

The Mavs found themselves in a tough uphill battle, losing the opening frame 27-3.  The Mav’s points came off the foot of senior Bryce Butcher who knocked in a 31 yd FG.  The next two quarters saw both teams swap field position, just not points.  The final tally (41 – 3) had the Mavs dropping to 0-2 for the season.  The Mavs are back in Ellison Stadium this Friday hosting NCC rival, the Lafayette Jeff Bronchos.  Look for upcoming ticket information on McCutcheonAthletics.com!

The Lady Mavs golf team took to beautiful Ulen Country Club on Saturday to play in the Lebanon Invitational.  The invite hosted a number of talented squads from around the Indy area, and the course proved to be a fair challenge for all that competed.  The Lady Mavs took 7th place out of 12 teams, with sophomore Marlee Matz (96) leading the charge.  The Lady Mavs will now travel to the Crawfordsville CC this Wednesday to battle both North Montogmery and Southmont.

The Mavs played host to the Fishers Tigers on Saturday.  The defensive match was played under the lights after a picturesque late summer sunset.  The Tigers controlled the action throughout most of the first half, with senior goaltender Bryce Butcher keeping the match tight.  The match went into halftime with the Mavs trailing 1-0.  Jake Fultz was the lone shot on goal for the Mavs, who inevitably lost 3-0 on the night.  Next up for the Mavs is a road trip this Thursday (9.3) to West Lafayette to take on the top-ranked Red Devils.