Early Saturday morning, many Maverick student-athletes loaded up on busses in the cool autumn air and scattered across the state to represent McCutcheon in the sports that they love.  Unified Football, Cross-Country, Volleyball, and Soccer all hit the road with tournament mindsets and win or go home scenarios looming.  Here’s a quick breakdown of all the action that happened on what ended up being a Championship Saturday!

The Unified Flag Football team took their undefeated record up to Tippecanoe Valley High School for the Unified Regional tournament.  First up for the Mavs was a matchup with Ft. Wayne Carrol.  The Carroll Chargers brought an organized gameplan that provided a big-time test for the Mavericks.  While the gameplan looked good on paper, it was no match for the Maverick’s aerial attack.  Using the deep ball and several accurate passes, McCutcheon outlasted FW Carroll 56-26 to advance to the Regional Championship.

McCutcheon next faced a very talented Valparaiso team in the championship game.  McCutcheon wasted no time taking an early lead with a big play TD, securing a 6-0 lead.  Valparaiso did find the endzone late in the 1st half and trailed McCutcheon 34-30 at intermission.  During the second half, the Mavs defense struggled to tackle, giving the Vikings a chance to tighten the score with a couple scoring drives.  As the clock started to get late in the game, and the weight of moving onto the State Championship on everyone’s mind, the Mavs found themselves tied with 3 minutes left to play.  The old adage says defense wins championships, and that was the case for this Maverick team.  A late safety with 2 minutes left to play ended up being the deciding score, as the Mavs won their first Unified Flag Football Regional by the score of 50-48!

Next up, the Mavs will face Mooresville for the State Championship this Saturday at beautiful Grand Park (Westfield, IN).  A sendoff for the team will take place this Saturday morning at 9:45 AM in the front of McCutcheon’s Athletic Entrance.

The final Sectional game was bound to be exciting after the Mavs were defeated by Harrison 2-0 in the regular season and victorious in the NCC tournament after penalty kicks. This rematch did not disappoint. The first half remained scoreless. In the second half, McCutcheon’s Brittany  Crowe put in a goal, but it was ruled offsides. Then Harrison scored off a corner kick scuffle. In the last 8’ Shianne Switzer took on the defense and tied up the game in heroic fashion.

Two 7-minute overtime halves proved the even match-up with no goals scored by either team. The penalty kicks were just as exciting as the game! In the first round, McCutcheon hit the ball over. Harrison scored their first goal. B Crowe hit a beautiful shot in the upper 90 for McCutcheon’s second shot and Autumn Hogue made an important save to even up the goals, 1-1. The third shots were both goals with Ashley Craig scoring, and HHS hitting the corner. 2-2. Evalin Hair pulled the lead, and Hogue saved a second shot putting Mavs ahead 3-2. McCutcheon’s next shot went wide, and Harrison scored tying up the round at 3-3.

Round 2 had a whole new group of shooters. The first McC shot was saved by the Harrison keeper, but they turned around and missed the goal on their first shot of the second round. Michelle Escobar scored our second shot, and Hogue tipped the HHS shot, but it still made it past the line putting the score to 4-4. The third shots both went in (Halle Neibert). 5-5. Bianca Ramirez blasted one left while Hogue makes ANOTHER key save to take the lead 6-5. The next McC shot was saved, and Harrison scored to once again even it up 6-6 to end the round.

An unheard of 4th round of penalty kicks remained as 1 to 1. Megan Merryman perfectly placed the first shot, and Harrison hit the upper 90, 10-10. In the second shots, Escobar scores, and Harrison misses the goal which finally gave us the result, 11-10. With the game goals, McCutcheon takes the title with 12-11 victory against the Harrison Raiders after 18 penalty kicks.
The Lady Mavs now face Homestead in the first round of the Logansport Regional.  Catch more thrilling soccer action Saturday at noon!

The Lady Mavs traveled to Logansport High School to compete in the NCC Tournament. By going undefeated in the regular season in NCC play, the Lady Mavs earned a first-round bye. Play began at 11:00 against Lafayette Jeff. The Mavs wasted no time as they defeated the Bronchos 25-13 25-15.  Up next was the Richmond Lady Devils. Again, the Mavs took control of the set from point 1 winning 25-16 25-14.

In the Championship match, it would come down to our Lady Mavs against a familiar foe, the Harrison Raiders. Tough serving and strong hitting proved to be too much for the Raiders, as the Lady Mavs took the match 25-15 25-18. The Lady Mavs showed good balance throughout the day as all 17 players contributed on the winning day!

The Mavs end regular season play 29-1. Sectional play begins this week as McCutcheon High School will be the host. Your Lady Mavs have a bye the first round and will begin play on Saturday, October 19th. They will play the 2nd match of the morning, beginning at approximately noon. The Lady Mavs will play the winner of Harrison/Marion.  GO MAVS!!! 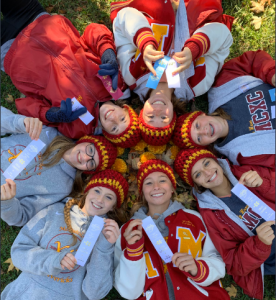 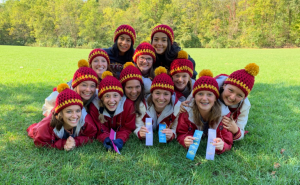 The Lady Mavs finished strong in 3rd place in Saturday’s Sectionals at the TippecanoeAmphitheater. Congratulations to top twenty finishers Ella Kanaby in 14th, Grace Auckley in 18th and Olivia Carithers in 19th. As a team they all move on to the Benton Central Regional!

The Boys’ Cross Country team ran a solid race to finish 4th in the Harrison sectional and advance to the regional meet next week at Benton Central. Three runners finished in the top 20 to claim all sectional honors, Damian Sanchez 11th, Josh Persin 13th, and Luke Milsaps 19th. 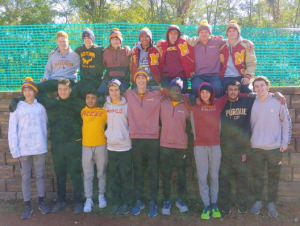 The #1 doubles group of John Shambaugh and Gavin Dardeen won the Kokomo Individual Sectional title over the past week.  The talented duo are 15-0 on the season!  The next opponent for the boys is TBD, with a Regional match-up set to take place over the next week.  Good Luck Mavs!