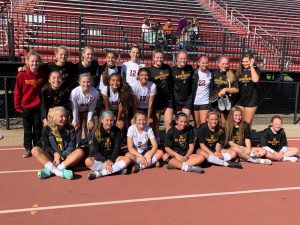 After a long day of soccer, the JV team came out on top at Lafayette Jeff for the Hagen Classic title. The first team they took on was Lafayette Jeff. The first goal was crossed in by Van Hook and placed in the near post by Ramirez. The second was passed in by Ramirez and put in the net by Escobar. The Mavs won 1-0 and played Harrison next. In the first 4′, a hand ball game Escobar an opportunity for a free kick which she played towards the goal. Van Hook made a run in front of the keeper and touched it in ahead of her. This sole opportunity led the Mavs to a 1-0 win for the tournament title.